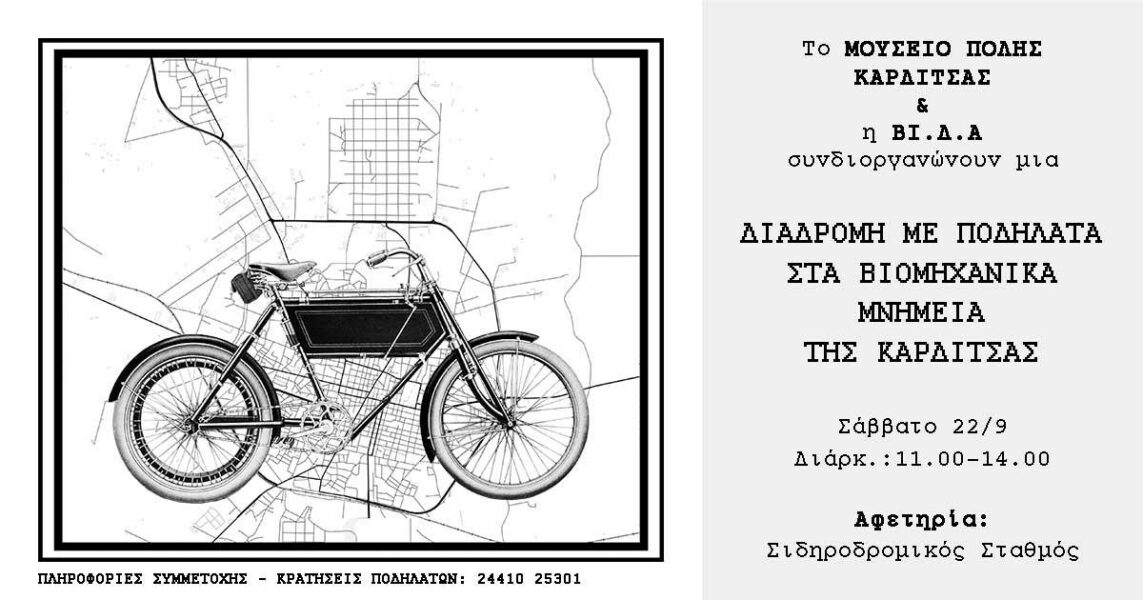 It was not an ordinary group bike ride. More than 40 cyclists aged 7 to 70 from Karditsa and beyond chose to visit the industrial monuments of Karditsa on Saturday morning, September 22. In fact, most stations were forgotten buildings, witnesses of development visions and expectations of other eras.

The action was part of the weekly events of the Municipality of Karditsa for the gentle movement and was supported by the Friends of the City Museum. Objectives of the co-organizers, the City Museum of the Municipality of Karditsa and the Initiative for the promotion of industrial monuments V.I.D.A. was to map productive activities, to get to know and get in touch with people, who once animated these activities, with a wider audience and to encourage a different understanding of the past, more experiential and substantial.

For the needs of this particular cycling tour, people were recruited, such as Dimitris Tsitsas, Costas Antoniou, Vangelis Zarchanis (Railways), Costas Zachokostas (Tobacco Station) and George Barboutis (Market), who guided the participants at Railways, the Tobacco Station and the Municipal Market respectively. They shared their experiences and memories with the participants, narrated personal experiences, answered questions willingly, encouraged the participants to narrate their own experiences. Of particular interest was the position of Maria Daniil, a founding member of V.I.D.A. and an architect in the Municipality of Athens, regarding the markets in general, their use, typology and evolution over time, on the occasion of her experience from markets of Athens.

The choice of stations facilitated the Museum's intention to make a small journey to the industry of Karditsa from the time of the annexation of Thessaly to the Greek state, when the Thessalian railway, despite its operational weaknesses (high fares, sparse routes, etc.), improved the conditions of agricultural production through the easier transport of agricultural products, while eliminating road isolation and the economic, social and cultural stagnation of the region. During the visit to the Tobacco Station of 1934 and the Stallion Station of 1939, the discussion continued with the visions of the 1930s, when local organisations actively mobilised to claim infrastructure projects in support of the primary sector.

The stop in the grove of Paparantza was combined with a short tour of the old aqueduct of 1901 and a tour of the Water Museum, which also hosts the exhibition of the students of KDAP Karditsomagoulas on the subject of the bicycle. Upon their return, the team had the opportunity to get to know the also forgotten brick-and-mortar factory of Oikonomou Bros (1927), one of the dozens of uncharted processing companies established in the city in the 1920s, awarded by the Ministry of National Economy for the invention of the five-holes bricks it produced. Last stops of the route were the Old Electric, the only surviving public industrial building in the urban fabric of Karditsa, and the modern building of the Municipal Market, a reference point for the economic life of the city, since its construction in 1928.

At each station of the ride, a solution was added to the original riddle of the excursion: of course, the engineer Evaristo de Chirico, director of the Thessalian Railways, had to be accommodated in the simple but spacious neoclassical house, opposite the station, now owned by Greek Railways, on 1885. The first steam mill of Karditsa (1884) belonged to Konstantinos Papachristos from Evritania and the first steam locomotive (1899) to the Christidis brothers from Andros. The rapidly growing crop of Thessaly, since 1881, was tobacco and not cereals, and finally the hundreds of tobacco workers in Karditsa were indeed determined to claim the Sunday holiday in 1910, because by then they had already organised mass strikes and mobilizations.

The participants expressed the desire for more thematic visits to the city and the museum said it was willing to work out their ideas and suggestions.